My name is Marfa and I was a virgin. But, here’s the thing; I’m married. Yes, married. And, yes, still a virgin. 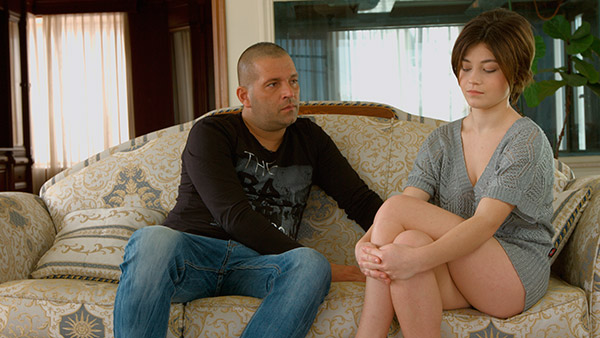 At my 18 birthday party there was a lot of drinking. My father had invited some of his friends as well as many of my friends. We had good food, good music, lots of dancing and my friends were very generous with their gifts to me. The party lasted many hours and it seemed as if every man at the party wanted to get into my pants.

They would kiss me and grab my ass or they would kiss me and then pull my large form breasts out of my dress to kiss them or to play with my nipples. By the early morning hours, I was tired of all these games the men were playing and even though it was my party, I left it to go outside and swing on the tire that was hanging from the old tree in our backyard. I spent a lifetime playing on this tire dreaming of growing up and what my future would be like.

I was so lost in my head that I did not notice the large man that had come up behind me. I recognized him as one of my father’s friends. Like my father, he was a trucker and spent many long hours on the road away from his family.

This man was quite large, perhaps at least 6 and one half feet. But he was also quite rotund with thick fingers and a large belly from drinking too much beer. There was hair all over him and his hair was long and unkempt just like his beard. I found him disgusting.

My father arrived soon after and I was thankful for his intrusion, this large unknown man was staring to creep me out his stare was so intense. My father was not there to save me, as it turns out my father was there to announce to me that I would be marrying this friend of his.

I gasped in shock at my father’s declaration as he made it very clear that all the arrangements had been made and as soon as the magistrate’s office opened in the morning, we would be married. My father’s word was law and I had no choice but to go through with this marriage.

Our marriage ceremony was unremarkable. Simple and efficient and soon I was a married woman to a fat, overbearing lecherous man who made my skin crawl. My father treated us to breakfast and I was forced to sit next to my new husband who I came to discover was 30 years my senior. His breath reeked of garlic and stale booze and he smelled of something vile. My stomach turned at the thought of becoming intimate with this man and the disdain must have been evident as my father made a snide remark to me insinuating that I should be grateful that his friend was willing to take me on as his wife.

In school, i was quite popular and while the opportunities for young women in Russia are limited to being married and breeding stock for Russian children and well, nothing. Many of my friends were already married, most, almost immediately after turning 18 and to older men who were willing to make a wife and release the girl’s father from any further responsibility. Some girls were fortunate to marry handsome and successful men, others like me were forced into servitude disguised as a maraige.

I spoke only when spoken to that day. It wasn’t as much me being a compliant bride, but it was more from that I didn’t have anything to say; well I didn’t have anything nice to say and as my husband and my father continued to stuff their faces with food, there was nothing more that I would have liked to have done but run away as fast as I could screaming of bloody murder!

Soon, they began to drink and I was slowly dying of boredom. That monster would grab my breast and palm it in his hand while grunting vile words to my father. My father did nothing but laugh at me. The more they drank, the worse their behavior became but at least it was postponing my wedding night which I would gladly have avoided as long as possible. But it appeared that my life was cursed and their talk took towards lewd looks and gestures as my father bid me well and warned me to behave with my new husband.

We went to what would be my new home. My husband was repulsive enough to begin with; his home mirrored the filth that surrounded his body. It would take a gallon of petrol and a match or two to make that hovel livable, but planning the cleanup was at least partially distracting from my new husband tearing my clothes off until I was naked and throwing me on our marital bed which I quite imagined had never been changed. He threw himself on top of me and forced my legs apart. He growled in drunken approval and grabbed my breast pulling my nipple into his mouth before shoving his fat, dirty fingers into my pussy. I thought I was going to be sick, he so repulsed me and the pain from his clumsy fingers trying to do God knows what to me was increasing and then as quickly as he had begun his onslaught, he stopped. And then I recognized that he had passed out cold on top of me, his weight crushing me into the mattress. I don’t know how long it took me to extricate myself from underneath him, but I finally freed myself and covered in sweat and the stench of him, I took a shower being extra gentle of my bruised and bleeding pussy. My life was fucked.

I slept that night on the couch and when the monster woke up, it earned me a slap across my face for daring to not sleep with him. I got the full on lecture as to my place i the home and how I was there to serve him. He pulled me roughly to him and kissed me hard, the smell of his breath making me retch in revulsion. That earned me another hand across my face and as the tears began to flow, he hit me once again just for good measure. He made it quite clear that he was my master and I was his slave; the problem was he was not some incredibly sexy Dom and I was no submissive like in the romance novels I loved to escape to. My new husband informed me that he was leaving me for three weeks and that our home would need to be spotless and he would expect a well cooked meal waiting for him upon his return. He left immediately, he left me alone and left me with no money. I would have to figure out how I was going to survive with no money, no job and no family support and I had three weeks to do so.

I fell silent at her joke and she picked up on my silence. “What?” she hissed, “he didn’t fuck you last night?” Breathless I explained that he fingered me, but fell asleep before we could consummate our marriage. My girlfriend shrieked in excitement and before I knew it, I was flat on my back on the couch, my legs spread wide and my panties were pulled to the side! I tried to protest and push her off of me, but she would not be deterred from her task. I was still a virgin, my hymen was intact. Sure, there were some cuts on my pussy lips, but she was sure that I qualified as a virgin and she immediately sent off an email to defloratioin.com offering my services as a virgin.

The next morning I woke up to a flurry of activity as my girlfriend had heard back from the producer, she’d sent him a photo of me and we were booked on the first flight out to Budapest in just a few short hours. We were on our way to Budapest, to sell my virginity to the camera and to get fucked by a real man, not the poor excuse I had for a husband who had abandoned me without money or resources. This was going to be interesting.

One thought on “Marfa Piroshka”