Today I bring to you the story of Nicole Birdman, our newest virgin model and it is not a pretty story.  I thought long and hard about telling you the real story; the entire story and after much thought, I knew I needed to bring you the truth.  In this case, truth is definitely stranger than fiction.  Franchesca 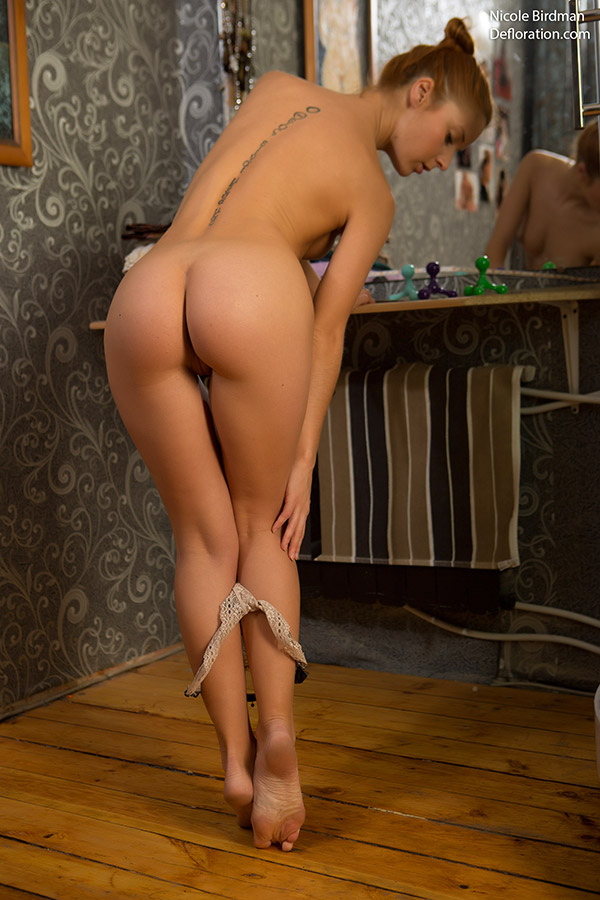 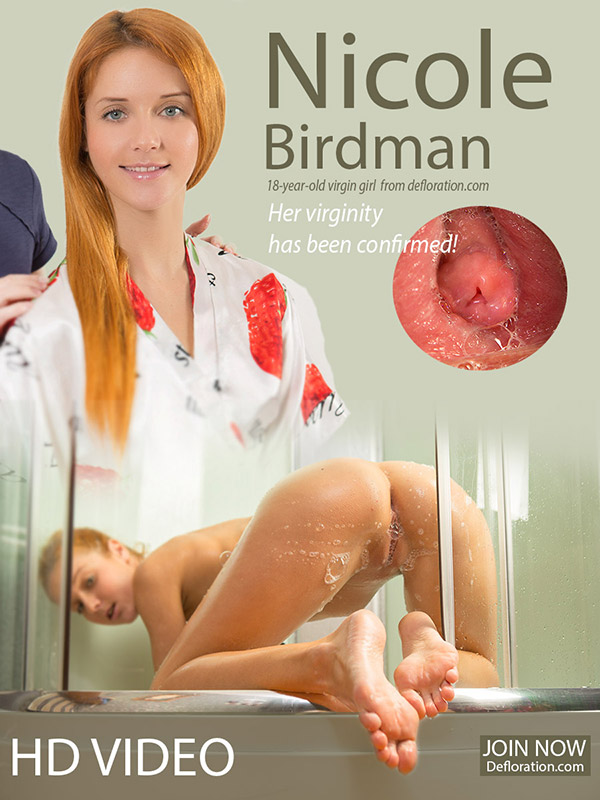 My knees are weak as I lean against the wall of the shower, but I am not done.  I adjust the nozzle on the shower head to a thick pulsating stream and I aim it right at my virgin pussy.  I dial up the massage strength as far as it will go and I seat myself on the shower floor.  I aim the pulsating stream direct to my clit and as my orgasm begins to build, I imagine the large cock of my lover pounding into me over and over.  I move the nozzle back and forth, ever so often grazing my asshole and soon my legs are quaking with the strength of my orgasm as I envision fireworks exploding in my brain.  As I lay boneless propped against the shower wall, the warm water soothes me as I come down from my orgasm.

Until recently, I was alone in my fantasies.  But a few weeks before I posed for my solo video, I discovered that I wasn’t alone.  I’d had a feeling of being watched for a while, but I just chalked that up to my vivid fantasies.  I should have trusted my instincts, because I did have a visitor, and interloper to my fantasies, my very own older brother.

My brother is six years older than I am, a real man.  He works hard and he is very handsome.  But he has been watching me.  I wasn’t sure how I felt about that at first, I was confused, this was not acceptable or was it?  I have read books about stepbrothers and other taboo sex stories, but while being tales of forbidden sex, they were rather titillating. I started inserting my brother into the pictures of my imaginary lovers and my fantasy hotness quotient doubled.
With my fantasies fueling my actions, I began to play to him while I masturbated.  Perhaps he thought I was performing for an imaginary audience, but in truth, he became my only audience.  The more I knew he was watching, the more I masturbated. The more I masturbated the more he watched.  And the bolder we both became.  At first, he spied upon me through a small crack in the door, but eventually, the crack widened as his boldness grew. Soon, I could tell that he was stroking his cock and within days, I caught my first sight of his cock as he stroked himself through the ever widening crack in the door.  He was long and very thick.  There was a roadmap of veins covering its heft and I imagined what pleasure those ripples would bring to my pussy.  I watched as he stroked himself from base to tip, swirling his hand around the tip before making its return trip back down its considerable length.  The more he stroked, the larger he became and when I imagined him to be fully erect, his own hand barely was able to contain its girth.  This went on for several days until in great boldness I called his name as I came in the shower.
His hand dropped from his beautiful cock and I motioned him into the bathroom.  He hesitated at first, then checked to make sure there were no witnesses to his perversion and entered the shower with me.  He came into the shower and pulled close to me and in his movement, as in my fantasies, his cock landed heavily against my chest and snuggled into the cleft between my breasts.  I felt the intense heat that rolled off of him and I relished in the sweet fragrance that his arousal made.  Our eyes locked upon each others and we stared into the depths of our souls as our hands roamed all over each other’s bodies.

His hands clasped my pussy and his deft fingers drew lazy circles around my clit and when he tried to breach my virgin pussy with his thick fingers, I pulled back and shook my head.  He understood and pulled me back close again continuing his onslaught on my most sensitive parts, taking care to show my peach hole attention as I showed it with the shower head.  The fact that while he had been watching, he’d been paying attention blew my mind as I instinctively pushed my breasts together and he began to thrust between them.

Soon, I began to feel the tell-tale signs of my impending orgasm and I threw my head back as his name escaped my mouth on a whisper. He was still circling my clit as I slowly came down from my first real orgasm and as his thrusts through my breasts became more erratic, he stilled quickly and as he swore, great streams of cum flew all over my breasts and covered them most spectacularly, just as I had fantasized.   As I liked myself clean and enjoyed the taste of my brother, he pulled me even closer and my mouth watered at the thought of taking his pulsing head into my mouth.

I still must keep my innocence as it is a priceless commodity for me and I hope to secure my future with my virginity.  When I can no longer profit from my purity, then I shall sell my virginity, perhaps to Tommy Stone and his producer, but I know that when that is done, my brother will be most willing to serve as the reality of future fantasies. You can download my video here: www.defloration.com

One thought on “Nicole Birdman”