Hi, I’m Blackie.  Well, at least that is my nickname.  I don’t want anyone to know that I posed for pictures in the nude, so you will just have to live with calling me by my nickname.  This would bring my family great shame, but as you see, I must do this. 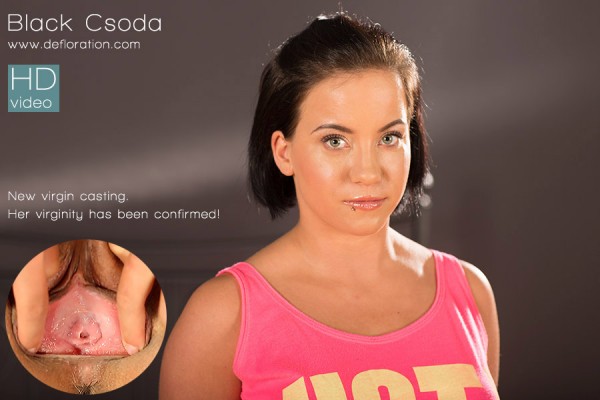 I live in Budapest with my mother and my siblings.  My mother is very strict with me.  I am 19 and have never kissed a boy or even had the opportunity to go on a date, even with a bunch of friends to just hang out.  My mother forbids it!  “Men are no good for you,” she screeches at me whenever I try to bring the subject up.  I finished with my formal schooling last year, but my mother has kept me so busy with working at a local cafe and with my sister as a waiter for her event company.  I have no time for rest or for boys.

I want to attend school to become a nail technician so I can leave my tyrannical mother and begin to live my life with boys, although my mother repeatedly tells me that I am too ugly for boys.  I believe her because my mother would never lie to me. I was at the cafe working last month and I overheard some friends talking about the great money they made as a model.  They remarked with a sneer that because of the money they made, they didn’t have to toil at such meaningless labor in a cafe.  In hushed tones, one of the girls even admitted to losing her virginity and getting paid for the honor of having a porn star fuck her.  I could not possibly comprehend selling her virginity and then allowing an unknown man to spread her virgin pussy lips and tear through her hymen on camera for all to see! She gave me a tip that was very generous and then gave me the e-mail for the producer.  She said I had a great body and should contact him. I held onto the paper for a few days thinking about what she had said and thinking even more about the money.  With the money I could leave my mother behind and make my dream of becoming a nail technician come true.  I contacted the producer and we agreed upon a date. When I arrived at the studio, I was rushed into makeup.  I had a few days earlier used a solarium so that I would have a beautiful tan for the shoot, but it ended up a disaster!  My skin was bumpy and peeling.  The makeup artist threw me into the shower and ripped off my clothes so that I was completely naked and my clothes were wet and ruined.  She was so angry at me as she scrubbed my skin with sugar scrub and a loofa.  My skin was raw and red when she was finished, but her anger had not abated.

She then washed my hair and used conditioner on it and then while I was still wet and in the shower she lathered my entire body with lotion.  By that time I was as slippery as a greased pig and was ready to be finished with her, but she was not done with me yet.  Then she set to scrubbing my face and by the time she finally pulled me out of the shower, I was so done and over with this making money by being a model concept. As i sat covered only by a robe, she continued to attack my face and hair.  I thought she was a madwoman!  I certainly hadn’t done anything to make her angry.  Maybe my mother was right about me being too ugly for boys and this artist was frustrated with my ugliness. I had been at the studio for hours now and had not even begun to film, but when the producer entered the room I heard him audibly gasp in shock.  I knew right then that he no longer wanted to film my virgin pussy or see my hymen; I really was too ugly for this job.  I stood out of my chair and turned to leave and as I turned, I caught a glimpse of myself in the mirror.  I was rooted to the spot because I could not believe the sight I was seeing.  It was me, but it was me beautiful.  I no longer looked like a teen, I looked like a woman, a beautiful woman.

And I was ready to shoot.

For now, I shall stop telling you my story and soon you shall see my pictures and video at defloration.com.  I promise you that soon I will continue my story and you will find out my secret feelings during the photo shoot.  After all, I was advised, that men love a mysterious woman…., and a teen virgin pussy!